Joel Hurt was a civil engineer, a developer, and a visionary. In 1887 Hurt hired James Forsyth Johnson to design Atlanta’s first garden suburb after the fashion of famed landscape architect Frederick Law Olmsted. Inman Park’s name honors civic leader Samuel M. Inman. Since Inman Park was 2 miles east of Five Points, an important part of Hurt’s plan was the building of the city’s first electric trolley line, which began service from downtown to 963 Edgewood Avenue on August 22, 1889. The restored original Trolley Barn at that address is now a popular rental hall for weddings and other events.

The plan for Inman Park’s 189 acres included broad streets along which were planted coastal Georgia live oak trees. Though such trees had never been known to survive in Atlanta, many of these giants still tower over the neighborhood today. Many prominent Atlantans lived in Inman Park, including Coca-Cola founder Asa Candler, whose Callan Castle stands at the corner of Euclid Avenue and Elizabeth Street, and Hurt himself, who lived at 167 Elizabeth Street.

Inman Park peaked as a fashionable address around the turn of the 20th century. Soon, the public’s taste began to turn away from Victorian architecture, and the neighborhood began to lose its wealthy residents to other, more opulent developments such as Druid Hills and Ansley Park. The neighborhood declined in prestige and was considered little better than a slum by the 1960s, and its darkest hours occurred when some fine homes were knocked down to make way for two highways (though they were later halted before construction began). The amazing transformation-symbolized by the neighborhood’s butterfly logo-began in the late `60s when determined Atlantans began to revitalize the area.

Today, Inman Park is listed on the National Register of Historic Places. Homes in Inman Park range from bungalows in need of work to fully restored Victorian mansions and prices reflect this: Home start at $200,000 and go up to $1,000,000. The district’s annual springtime festival draws thousands of visitors and is one of the most popular of Atlanta’s many neighborhood festivals. Lively Little Five Points, the eclectic shopping districts between Inman Park and Candler Park, helps nearby areas attract new residents as well as visitors. The Inman Park / Reynoldstown MARTA station serves this area.

Duplex, owner-occupier could live in the 3/2 apartment upstairs and rent out the 2/1 downstairs (or vice-versa). Unique location, beautiful duplex, one block from Krog St...

1108 Colquitt Ave in Inman Park is available for the first time in 35 years. This wonderful circa 1908 Craftsman bungalow is a large and loved home with an open kitchen a...

Location, location, location! Located right on Edgewood Avenue and literally steps away from the Beltline. Parking will never be an issue as there is a 2-car (tandem) gar...

Walk everywhere in this fabulous Inman Park location. This circa 1920's home was originally a duplex and was converted to a single family home by current homeowners. ...

Listings on this website come from the FMLS IDX Compilation and may be held by brokerage firms other than the owner of this website. The listing brokerage is identified in any listing details. Information is deemed reliable but is not guaranteed. If you believe any FMLS listing contains material that infringes your copyrighted work, please click here to review our DMCA policy and learn how to submit a takedown request. © 2022 FMLS. Last updated 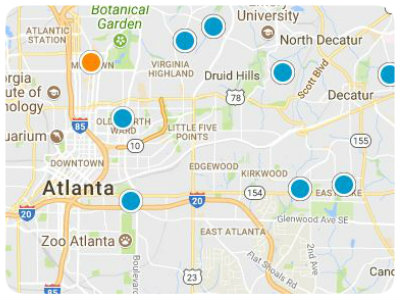